OEES, Nazira, Sivasagar and Lakwa require one Accountant for their KG School situated at Nazira on temporary the basis for a period of 10 (ten) months at consolidated salary @ 11,000/-(Rupees eleven thousand only) per month. 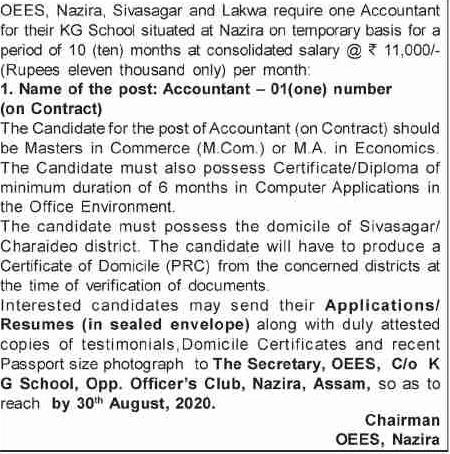 The Candidate for the post of Accountant (on Contract) should be Masters in Commerce (M.Com.) or M A. in Economics. The Candidate must also possess Certificate/Diploma of minimum duration of 6 months in Computer Applications in the Office Environment. The candidate must possess the domicile of Sivasagar/ Charaideo district. The candidate will have to produce a Certificate of Domicile (PRC) from the concerned districts at the time of verification of documents

Interested candidates may send their Applications! Resumes (in a sealed envelope) along with duly attested copies of testimonials. Domicile Certificates and recent Passport size photograph to The Secretary, OEES, C/o KG School, Opp. Officer’s Club, Nazira, Assam, so as to reach by 30” August 2020.