Applications are invited in prescribed format for the post of “Revenue Sheristadar” in the amalgamated establishment of the Deputy Commissioner, Goalpara in the pay Band- Rs. 22000-97000, Grade Pay – Rs. 11,500/- per month plus other allowances as admissible as per the provisions of the Assam Services (R.O.P.) Rules, 2017 and amendments thereof and under “The Assam Ministerial District Establishment Service Rules, 1967” as amended.

The candidate must have served at least 15 (fifteen) years in any of the Deputy Commissioner’s establishment in Assam and must have experience in different branches in General and Revenue Branch in particular.

Applications stating age, educational qualification, present and permanent address and experience in different branches supported by attested copies of certificate, a copy of recent passport size photograph along with Annual Confidential Reports of last 5 (five) consecutive years should reach the office of the undersigned on or before 19.09.2020. 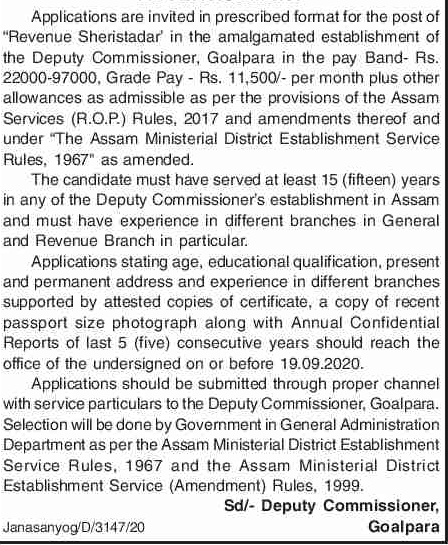