Assam Government is going to make the state corruption-free by doing some strict action by Assam Police against corruption. The step is already taken and the result you can see at the last of this page. Now The public can raise their questions against corruption.

If a county is to be Corruption free and become a nation of beautiful! minds, I strongly feel there are three key societal members who can make a difference. They are the father. the mother and the teacher. 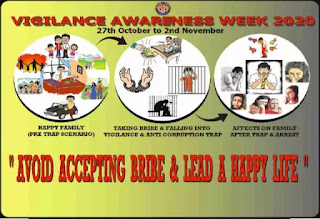 Q.1 : Who is a Corrupt Public Servant?

Ans: Whoever accepts or obtains or attempts to obtain from another person for himself or for any other person any undue advantage as a motive or reward to induce a public servant, by corruption or illegal means or by the exercise of his personal influence to perform or to cause performance of a public duty improperly can be defined as a Corrupt Public servant under Section 8 of P.0 Act, 1988 (as amended 2018).

Q.2 : Who can approach for conducting a TRAP against Corrupt Public Servant?

Ans: Any person from the public from whom any Public Servant has demanded BRIBE illegally against performing a Public Duty.

Ans: TRAP can be laid against any Corrupt Public Servant is irrespective of Rank or Position in a Govt. Office.